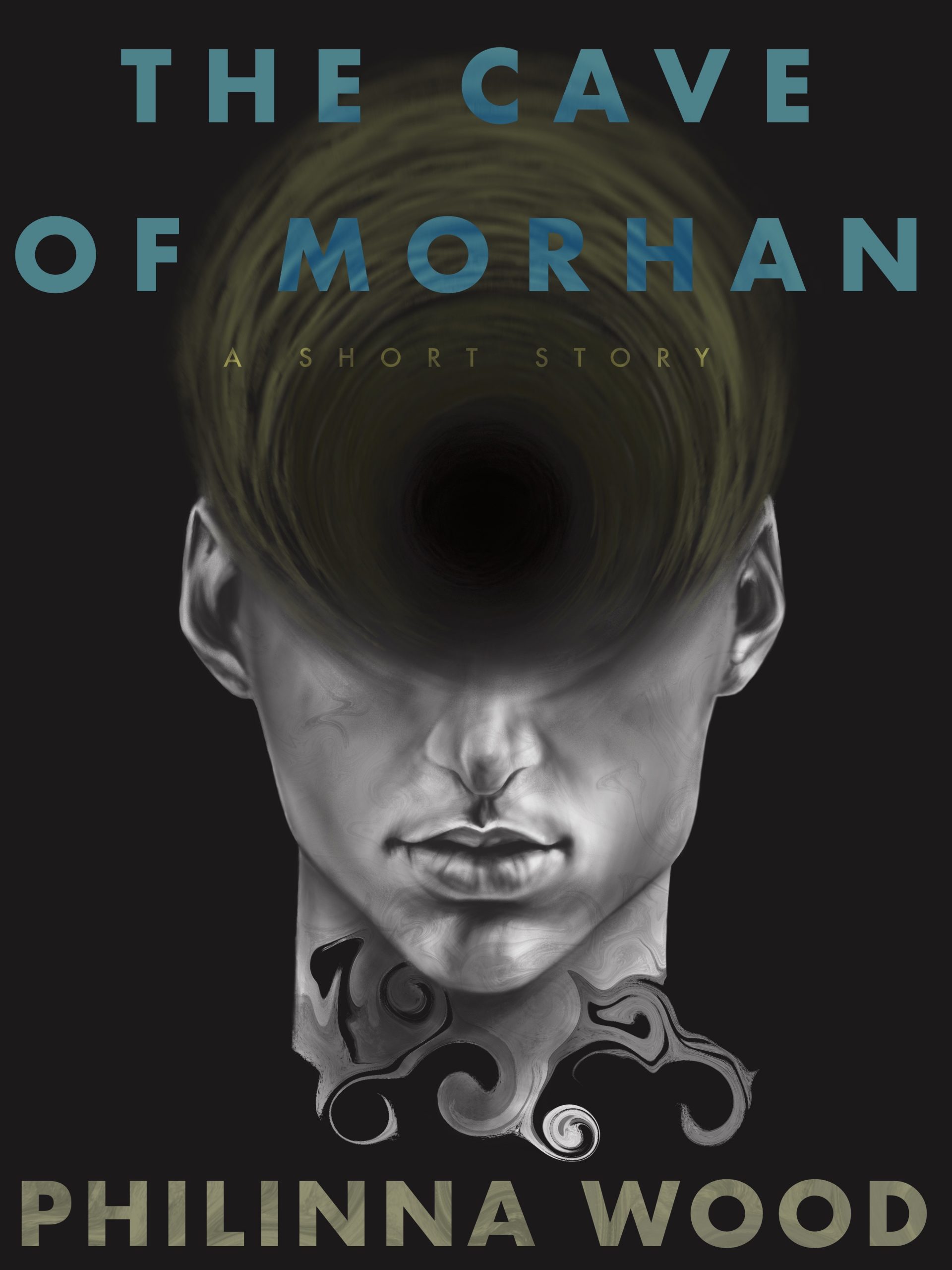 The moon hung low over the cave of Morhan, like a silver sphere with gray splotches that scarred its surface and marred its beauty.

The cave’s maw was ever open. No movement came from the darkness within. No sound broke the silence except for the light crackling of twigs surrendering to a sizzling campfire a few safe paces from the cave’s entrance.

Two men sat facing each other, their chins cupped within palms slick with sweat and cold with fear. Their eyes stared into the fire, refusing to dart to the cave’s entrance, not daring to answer its uninviting call.

One of them was an old man, well into the last years of his life. He had donned a worn-out cloak, its once black color faded to gray after the countless washings it had received in the murky waters of the river that crossed the village. He twirled the ends of his long mustache between his fingers.

The other one, who answered to the name of Fhorin, was a young shepherd, well-known in these lands. He had been the one to hire the swordsman and send him into the cave to kill the monster that had savaged his sheep. Most of them went missing, never to be seen again. But the ones he found, the little ones the monster had dared to leave behind, had been butchered and slaughtered, with slick cuts across their throats and claw marks on their soft bodies.

At long last the old man broke the silence, his words a mere whisper but breaking the spell like thunder. “He’s been gone for too long.”

Fhorin nodded, perking up. He had his back to the cave, and in such a place, he wished to remain. No need to glance at things his heart couldn’t bear. “Hmm” was all he said.

“Should we go look for him?” the old man urged.

It was a thought that hung between them, like a sharp blade without a hilt—it cut on both edges, and neither of them dared to be the first one to pick it up. Yet now the old man had brought the thought to life, and there was no way to take it back. And as they waited outside the cave, the two men questioned the swordsman’s fate. Was it too late, or could they save him, bring him back out almost unscathed?

Fhorin shook his head. “I can’t go in there. Let’s save our efforts and pray in silence.”

“Tell me about him,” the old man insisted, not intent on keeping silent anymore. “How can I pray for someone whose name or nature I don’t possess knowledge of?”

Fhorin looked at him with eyes of sorrow, for the old man had a point. “He was a stranger,” Fhorin whispered. “A traveler of villages, doing errands here and there to earn his bread. And I needed an errand done. I sent him in there without a word of warning. I never asked for a name. Only for a price.”

The old man sighed. “You didn’t tell him what he would face, but did you at least mention the fate of the ones who enter the cave?”

Fhorin shrugged so high his shoulders brushed the lobes of his ears. “We don’t really know their fate,” he said, drawing a circle on the soft soil with the tip of his boot. “No one has ever returned.”

The old man stirred the burning twigs with a stick, rekindling the fire, making the glow reflected in Fhorin’s eyes brighter. “Why do you think it is so?”

Fhorin shuddered. “I don’t think. I know it to be true. If … if I had told him all I know, he’d never have gone into the cave.”

The old man stood still. “What is it that you know?”

Fhorin gulped, bidding his tongue not to speak, but his conscience couldn’t stand the burden. He hadn’t warned the stranger—perhaps it was too late for him now—but he could at least confess to this old man who kept him company and seemed eager to listen. “The night it first arrived, the leaves on the trees rustled a warning of its coming. The hoots of night owls ceased, drenching the air in a deep silence. At first its footings sounded soft, like light squelches on muddy earth wet with a weak drizzle of rain, getting closer and closer. The scrape of its long nails against the walls of my hut split my ears, a thin, long sound that made the hair on my body stand on end. I dashed beneath my bed and held my breath. Its heavy breathing, a heaving sound, a low growl of anger and hunger, made my heart burst inside my chest.

“And then I heard a light sniffing, the faint sound of a searching nose, searching for prey to feed its belly. It must have thought me a small reward, a sweating man beneath a bed, for it turned and marched toward my sheepfold, its heavy footsteps a dragging sound, plowing the earth, preparing the soil for the blood that was to be spilled.

“I heard my sheep stirring in their confinement. My clever creatures always knew when danger was near. They must have noticed something approaching, for I heard the shuffling of their feet as they stood, awoken from their sleep.

“And then the bleating began, the hopeless cries of my sheep, as panic settled in. I heard the thumps of their soft bodies against the fence as they desperately tried to escape. The slashing sounds came not much later; the beast was slaughtering my livelihood.

“I went to my window and saw a shadow. It was as tall and slim as the trunk of a leafless tree, with hands and feet jutting out of it like countless branches. As the shadow moved, the sheepfold’s walls trembled and shook, and my poor sheep inside trampled each other, finally breaking the fence.

“They spilled into the black field, a frenzied scatter of terrified creatures, their eyes wide and ears stuck to their heads, as if they were trying to drown out the horror. They ran uphill and disappeared, leaving behind an empty field.

“And then the creature stepped into the moonlight. And what I saw, it frightens my heart to tell you. But since you asked me, here goes: It was a monster, the ugliest thing I’ve ever beheld. Its head was narrow, with sparse hair that fell around its face like strings. Its nose was long and crooked, with gaping nostrils that dripped with blood. Its mouth had thin lips stretched open to reveal a set of sharp fangs, like ivory prickers. Its body was scrawny, and green skin was stretched thin over its bones, so thin I thought the bones beneath it would pierce it, finally gaining their freedom. It moved about with a weird gait, dragging a limping leg behind it, its long arms swaying with every move, carrying the long talons that had scratched my walls.

“Its head moved about, and then its eyes locked with mine. It stared right through me, making my limbs go numb with fear, my jaw drop in horror, and my breath catch in such a fright. I dared not blink but stood there, rooted.

“And then it let out a horrid howl and started running. When it had crested the jagged hill, it stopped and gave me one last look before it descended, disappearing from my sight.”

Fhorin drew a deep breath and stared at the old man. He had his eyes on the fire, but his keen ears listened to Fhorin’s tale. “It must have given you a right scare.” The old man held Fhorin’s gaze. “This mighty monster … what was its name?”

Fhorin threw his arms into the air. “You ask me questions I do not know the answers to. It was a monster. What does it matter? It killed my sheep, so it must die.”

The faint shuffle of feet resounded behind him, coming right out of the cave. Fhorin raised his head. “Did you hear that?” he asked the old man, yet the old man didn’t speak.

Fhorin kept his back to the cave, not daring to look. The sound of footsteps got even louder. “Someone is coming toward us,” he said, waving his hands, trying to get the old man’s attention.

The old man finally raised his eyes and held Fhorin’s scared gaze. “Will you behold the nameless creature?”

The old man motioned him to the cave. “Who, then, will save the nameless man?”

“No, no, old man,” Fhorin begged. “My heart can’t take the gruesome sight.”

“What is the fate of those who enter?”

Fhorin paled, clutching his chest. “No, no, I beg you. I’m really sorry. I should have warned the nameless man.”

The old man smiled, and the sound of footings stopped. Whoever had come out of the cave must have been a friend and not a foe. Fhorin armed his heart and turned.

There, in the cave’s entrance, stood a man older than he remembered when he was tasking him with fighting the beast. The man had a black cloak tied over his shoulders and a grin of triumph etched on his face. His left hand held a mighty sword, and his right clutched the overlong hair of a severed, ugly, monstrous head. He called out to Fhorin. “It was just a troll.”

Fhorin jumped to his feet, his heart filled with joy and relief. He spun to get his heavy pouch, with coins that clinked inside the leather. Turning back to the stranger, he found him gone, together with the head that he had declared belonged to a troll. The old man had also disappeared, and Fhorin scratched his rounded head.

Fhorin frowned and shrugged his shoulders as the sun rested on the mountain’s peak. He started for his hut, and to his amazement, his sheep were there, inside their fold. No blood was dripping, no fence was broken, and no marks betrayed the beast’s being.

On his bed rested a cloak, its once black color faded to gray.

Connect with me on social media

Are you looking for something specific?